Positive Psychology is the science of creating happiness in the community, at work, within families and even in Governance and development of positive institutions. Career is one element of life which a majority of human beings choose owing to their specific needs which may be from physiological to hygiene or self actualization or for plain survival! Positive Psychology can work well in making decisions about career, more so for people who feel stuck in their current sphere of work. So, this can be a good opportunity for Positive Psychologists as well as for the working professionals and they can use these tools for their benefit. Before using any such tool, you need to answer these questions to yourself (meaning a person who is interested to review his/her current career scenario)


As a second step, once you have answered the questions above, move on to a career matrix and start filling the blocks as mentioned (this is just an example for lay people). So, you can fill up the moments of happiness, your professional interests, work life harmony or the lack of it and your achievements till now and maybe use various sheets of paper to write these things down and assess how these factors are important in your life. 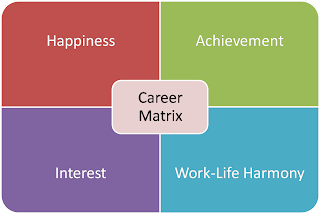 We, at Positive Psychology India can provide other such tools (some of them free!). Please contact us for details